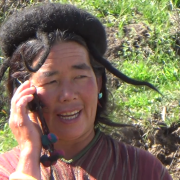 [Presented at Stanford University’s AGLS Conference in Fall 2015, as well as featured in Dartmouth’s MALS Journal.]

The question of place has become increasingly complex in our globalized world. In my work, I explore this complicated issue of place—and how it is understood and internalized by people—by looking at the case of Bhutan. Bhutan is a fascinating case study because it is currently undergoing modernization—including a change of government from a monarchy to a democracy—as well as development through what is known as Gross National Happiness (GNH). Specifically, GNH aims to preserve tradition while promoting sustainable economic development.

My fieldwork in Bhutan has led me to challenge the framework created by GNH. Though GNH purports to protect tradition, I argue that the very act of protecting “tradition” leads to the death of numerous other varieties of local rituals, practices, and languages. While previously Bhutan consisted of numerous places—each with its separate identity and local tradition—the government is now promoting, through GNH, a single place: Bhutan. The government attempts to create this single place of Bhutan by creating a single identity: the national Bhutanese identity as understood through the dominant ethnic group. Furthermore, the government then promotes this place as a sacred geography, inviting Western Orientalism through tourism. Bhutan thus offers an incredible example of the complexities of place in the modern era: through development, national place supersedes local place, and, in turn, national identity supersedes local identity. At the same time, people are resisting these clear dichotomies created by GNH, leading to what Anna Tsing calls “friction.”