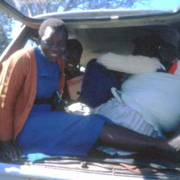 This paper looks at Africa, urban modernity, and its relationship to religion, specifically Christianity. I explore neoliberal, economic, and social ideas and specific examples of these shown in Christian NGO’s. The relationship of religion to government, economics, “modernity”, and “development” and focus on community and how capital and urban space is divided is examined. Christianity’s relationship and indoctrination of economic, capitalist market ideals are weighed. I describe a specific system of transportation in Harare, Zimbabwe, and look at its organization, function, and inner workings. Further, I focus on the participants’ social, economic, and physical proximity and their relationship and definitions derived from Christianity and traditional Shona religion. A discussion of Christianity’s dependence and vitality necessitating from “opposing” ideas displayed in Shona religion provides more information on the role and dynamic relationship of religion and Shona and Western culture. I discuss how the E.T. ride sharing system is created, defined and interacts with Christian ideas and traditional Shona religion and community. I give a history and derivation of the system that arose out of demand and inabilities of the government. Also economically as well as socially this system was created and derived by economic and social forces some outside the community and more of a part of the world economic community and others from within the distinct, local community. The actions and happenings here are a part of the economic, modern industrial, neoliberal, Christian environment, yet appear differently than the ordinary, scripted, definitions of these ideas.

[THESIS] The Impact of Development in Bhutan on Family, Identity and Everyday...
Scroll to top