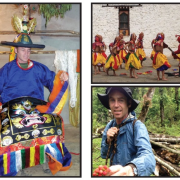 When Brian Young began thinking about his thesis he knew he was interested in exploring the impact of development on the everyday life and culture of the Bhutanese people. He was specifically interested in focusing his research on the nomadic yak herders of Merak, a village in Bhutan. In 2014, the Graduate Alumni Research Award and MALS thesis award allowed for Brian to travel to Bhutan to live there for three months, part of which was with a Bhutanese family.

Young’s thesis research on the Eastern Himalayan Brokpa people of Merak was centered on the impact development was having on the region’s traditional culture and family life. Brian integrated himself in his host family’s lifestyle in the midst of the Khaling jungle. It was here that he lived in their hut and helped with the everyday chores of milking cattle, sewing, and fetching water, in addition to his research.

The project explores how capitalist development, as well as Gross National Happiness (GNH) (Bhutan’s guide for ethical development) is impacting traditional definitions of family and identity in a rural village in Bhutan. This research plays an important role as Young explains, “It adds to our understanding of contemporary Bhutan and it also contributes to the field of anthropology by showing how modern development affects family, identity, culture, everyday life, and relationships between generations in a rural village.” Located between India and China in the Himalaya, Bhutan is a small country of under 1,000,000 people. Beginning in 2005, the Bhutanese government adopted a framework for modernization in accordance with an articulation of Gross National Happiness (GNH). Young spent time in the capital Thimphu, interviewing government officials about Bhutan’s GNH. “I wanted to see how GNH was actually put into practice, how development impacted the quality of daily life, including relationships across three generations of family,” said Young.

While in Bhutan, Brian interviewed many different people but mostly focused on his host family as representative of Merak people and culture. He was able to compare the experiences of three generations (grandparents, parents, and children) and how the varying generational differences formed the identity and understanding of everyday life. He witnessed the cultural changes occurring rapidly with the children of the family, such as the daughter talking on Facebook or the son gelling his hair according to fashions popular in Korea. Young wrote that, “While members of the older generations are concerned about the loss of traditional dress and language, close ties are still maintained between children and parents in the family that I lived with, for example through daily conversations by cell phone.”

With assistance from the Nuekom Institute travel grant and the Graduate Student Council travel grant, Brian recently returned to present his research at a conference in Bhutan sponsored by the United Nations Population Development Fund. In his presentation, he emphasized the loss of lands, languages, and livelihoods and the effect on Gross National Happiness and overall well-being. “I see a lot of disadvantages of development,” Young states. “I see how it can interrupt and distract from your happiness.”