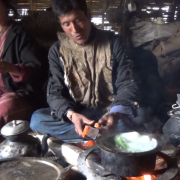 [Thesis presented for completion of Darmouth’s Masters of Arts and Liberal Studies program in Spring 2015.]

My thesis deals with transformations of tradition and culture in Bhutan that are happening as a result of GNH. GNH, or Gross National Happiness, is the government’s attempt to develop and modernize the country while preserving culture. I argue, however, that development is changing traditional practices in the country despite the government’s attempt to preserve such tradition. Furthermore, I suggest that the very act of the government attempting to preserve culture results in loss of other cultures. This happens because the government promotes the dominant ethnic group’s culture as representative of the nation, and this nationalism then becomes hegemonic and marginalizes subaltern groups. I argue that this reification of culture furthers the government’s goals of development by homogenizing the population in a way favorable to GNH.

I conducted research on these topics and reached these conclusions by spending significant time in Bhutan. Through ethnography and open-ended interviews, I investigated the impact of GNH on Bhutan’s population, across several generations. More specifically, I lived for a month with nomadic yak herders to explore how new laws and development are ending their ancient culture. By drawing on recent theorists in anthropology and philosophy, I analyze these moments to understand the changes happening in Bhutan.

My research and arguments have significance in topics such as nationalism, development, and globalization. My analyses of change in Bhutan undermine official narratives on the preservation of culture and instead demonstrate the confluence of the local and the global. I suggest that globalization and nationalism, as promoted in Bhutan through development, have profound influences on identity and affiliation, despite any attempts to preserve a seemingly authentic culture.

[ABSTRACT] Bhutan: The Paradox of Identity and Development
Scroll to top